After a little over 2 weeks at 'Home'(near Ripley) (Butterley Bank CCC) we set off for another Ripley but this time it was the one in Yorkshire!  We'd booked 2 weeks at The Cud Life which is an idyllic secluded small campsite near Harrogate which will be our home for the next 2 weeks.  So for our first week here are some of the things we've been doing in mostly lovely weather 🌞🌞🌞! 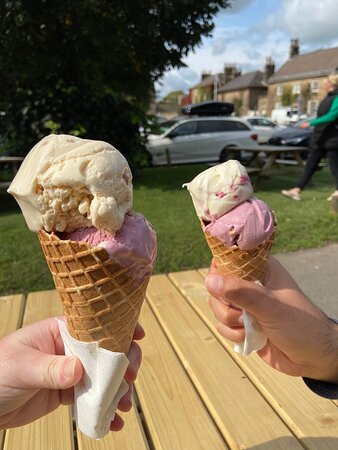 On Sunday we decided to stay local again and picked The National Trust's Brimham Rocks as our destination, but as you would imagine, on a lovely Sunday it was heaving! 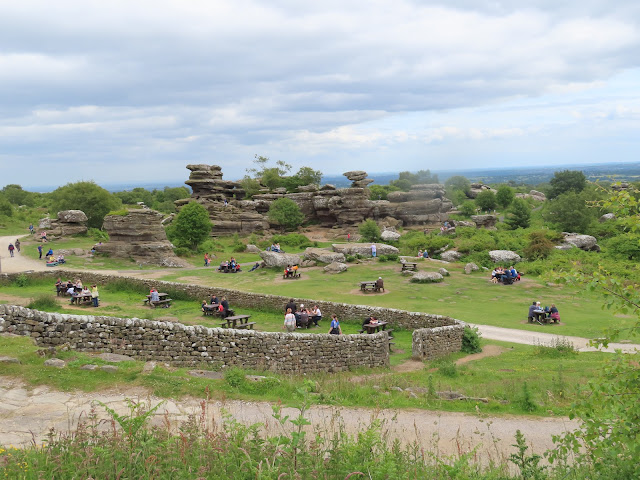 However, we made the most of it, and rather than staying within the crowded noisy immediate area above the car park we followed part of The Nidd Valley trail which led us up hill and down dale through old woodland where we had the company of the babbling Fell Beck, and then out across open fields.
The path eventually led us full circle back to the main area of the rock formations but as it was still very busy we decided we'd leave our explorations of them until a quieter day! 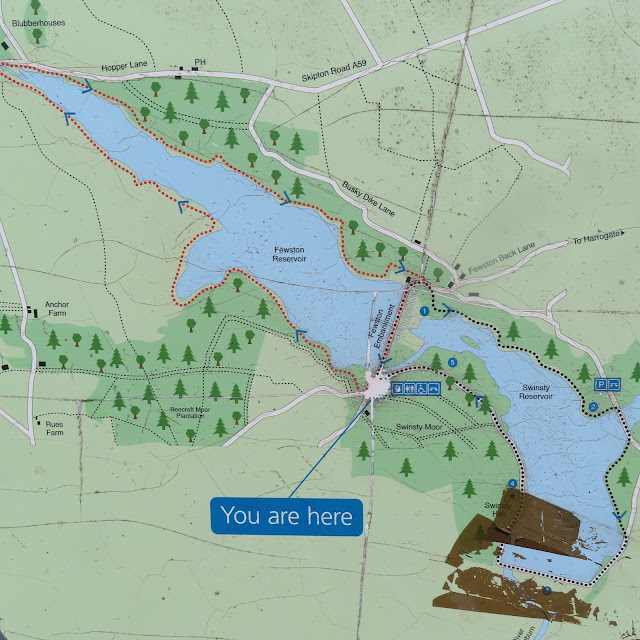 On Tuesday 21st I forgot my camera so no pics, but we set off on what turned out to be a 28 mile a bike ride along quite country roads and dedicated tracks. Soon after we started we found ourselves on the The Beryl Burton Way, and although I'd heard of Beryl Burton OBE  I hadn't realised she was such a national champion.  The info boards told us that her early life had been dominated by chronic health problems that included a 15 month stay in hospital due to rheumatic fever, and that the medics had suggested that she should avoid strong physical exertion in her future.  However, she mostly ignored that and in her later life she dominated women's cycling for many years by winning more than 90 domestic championships, seven world titles and setting a record for a 12 hour time trial that exceeded the men's record for two years.  Sadly, on May 5th 1995 (at the age of 58) Beryl's body was found next to her bike!  It seems she had suffered a fatal heart attack while out delivering invitations to her 59th birthday party!
From there our ride took us onto Farnham which has won the best kept village award, and then on to the Cricket Ground at Bishop Monkton where a croquette match was in progress!  We had our picnic in the very hot sunshine, and we were made very welcome by a lady who told us we could use the 'necessary' in the club house if it was 'necessary' 😂!  After that we had a second break at Markington Village Community Centre before a quick swoop downhill all the way back into Ripley!
Wednesday saw us visit  the lovely town of Knaresborough but on a market day that was quite busy as well!  However, after an aborted attempt to park within the town centre we ended up in Conyngham Hall car park which sits right beside the River Nidd.  From there we toddled into the town via Bebra Gardens and just after we were expelled from there we found ourselves gazing at the magnificent old Viaduct that spans the River Nidd! 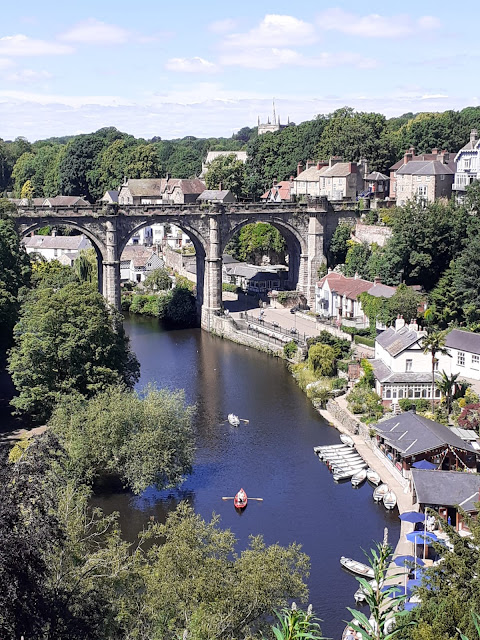 The info boards informed us that we were standing in the Nidd Gorge - a valley that is up to 120 feet deep and that was carved by the River Nidd 16,000 years ago.  The original Viaduct was built back in 1848 but due to shoddy workmanship it collapsed into the river on a Saturday afternoon on March 11th 1848 and that caused the river to rise by 12 feet and dozens of fish were killed by the lime in the mortar.  It was rebuilt in 1851 at a cost of £9,803 and since then the structure has stood 78 feet high with each of it's 4 spans stretching nearly 57 feet.
From there we proceeded into the Castle Grounds before a quick recci of the market followed by lunch at 'Spoonies' Crown Inn.  However, while we were in the pub we abstained from having a pudding!  Instead we visited Thomas the Bakers and indulged in two delicious cream apple turnovers which we took back to the Castle grounds to scoff with our thermos of coffee!
Thursday saw us back at Brimham Rocks and thankfully it was much quieter thus allowing us to play climbing and scrambling  games amongst the rocks that with a bit of imagination became animations of various well known objects and characters. 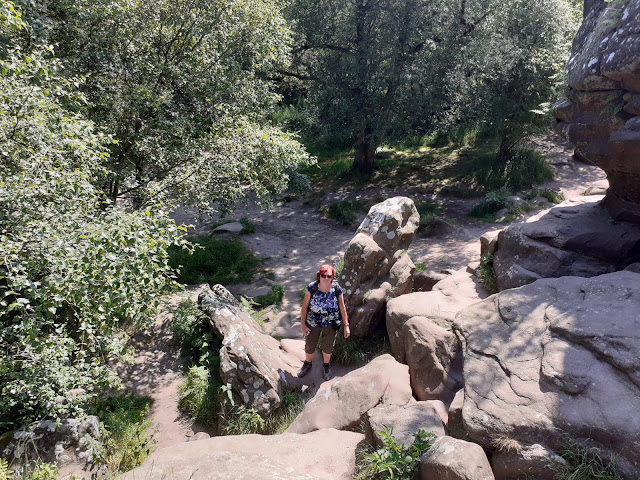 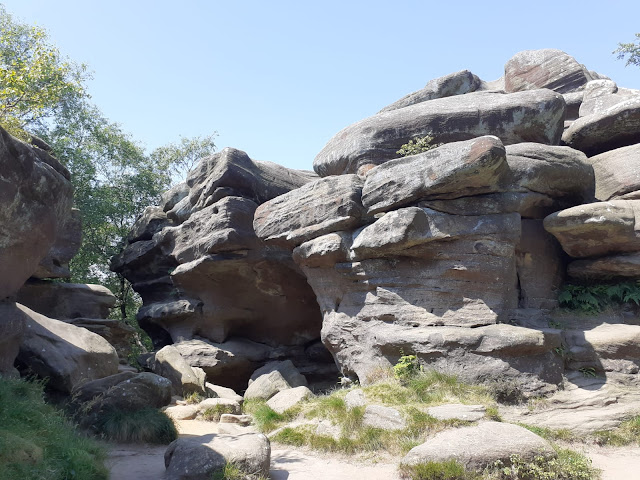 We also ventured out across the Moorlands to see the Mushroom Rock and from there we had magnificent views over Nidderdale and the moors of Pateley and Eavestone. 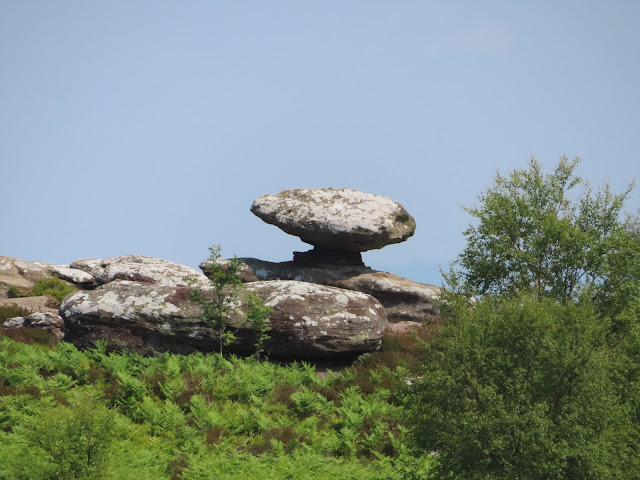 And that brings us around to Friday where heavy thunderstorms were forecast for the afternoon!  Therefore, we awarded ourselves a day off but we did nip into Ripley on our bikes to the local butcher for some good old Yorkshire Meats. Thankfully, the thunderstorms seemed to be a figment of the weatherman's imagination, but hey ho, we enjoyed our day of relaxing!!!
Posted by Linda Varney at 16:50:00 No comments:

We are two very lucky people - John and Linda Varney. The time in our life arrived to allow us to up sticks in search of a different life style that included travel and adventure. Our journey started back in September 2015 when we sold our house and most of our possessions and brought our first motorhome, and at that time we had no planned itinerary or time scale as to where and when we would roam. For five and a half years we travelled through much of Europe and Scandinavia but in June 2021 we found ourselves ready for a change so we exchanged our beloved Motorhome for a caravan and that will be our full time home while we continue with our nomadic wanderings for the foreseeable future.
We've now been travelling for nearly 6 years and although Covid has interrupted our roamings in Europe we still plan to travel and explore extensively within our own beautiful shores.

Days Lived Full Time in our Motorhome and Caravan